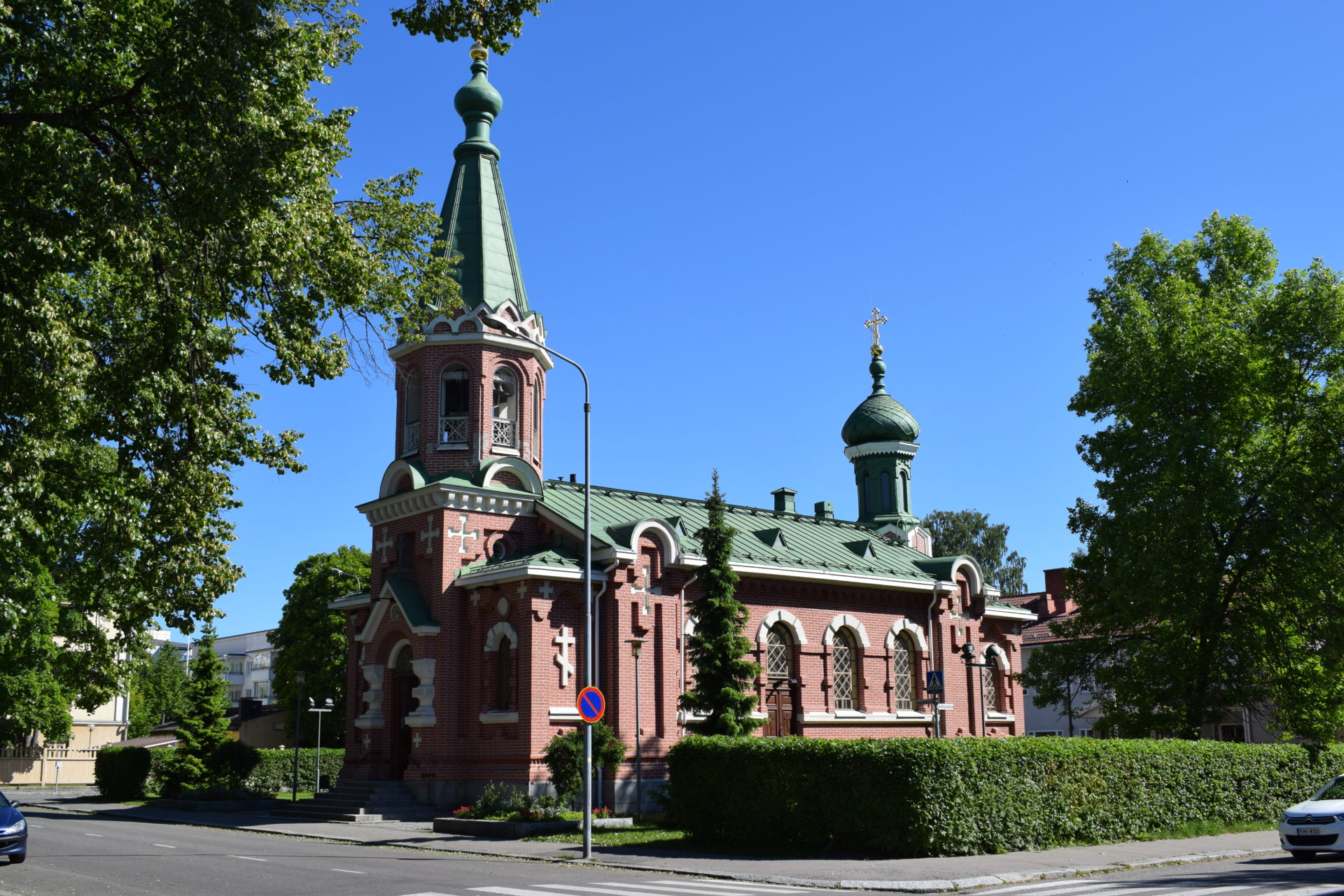 The Main Church of the Orthodox Archdiocese The Cathedral was designed by Alexander Isaksson, an architect from Vyborg, and built in 1902-1903. The Temple was consecrated by archbishop Nikolai on January 3, 1904 and is dedicated to St. Nicholas the Wonderworker, the archbishop of Myra in Lycia.
The building is an example of Old Russian style, but it also contains western architectural features. The building material is baked redbrick plastered on both sides. The exterior is painted to resemble brick pattern and the upper part of the interior is upholstered with wood. In the belfry there are seven bells of different sizes made by Orlov Foundry in St. Petersburg. In 2004 the Cathedral was renovated to its original form: e. g. all the church walls are in the same colour as in 1904. The Cathedral occupies from 250 up to 300 people. The Cathedral is oriented from West to East. The Altar is at the East and the congregation faces East, the sunrise, the Sun of Righteousness, Christ. As such the Cathedral represents gradual way of deification (theosis): the narthex symbolizes the world and the nave a place for striving for the altar – the Kingdom of Heaven. In humble respect to God the congregation stands during the Holy Services. The iconostasis was made by Semen Abrosimov Carpenters in St. Petersburg and icons in it were painted by the nuns in Convent of Resurrection in Novodevitš, located near St. Petersburg. They are good examples of the romantic iconographic style of the era. The candelabras have been made in St. Petersburg and received as donations to the Church.

On the left side wall near the iconostasis is placed the oldest icon of the Cathedral called “Deesis“, the oklad of which has been stamped at the end of the 18th Century in St. Petersburg. This icon comes from Käkisalmi in Carelia, Russia. The icons on the nave back walls are mostly from the previous wooden church, built in the middle of the 19th Century, and the icons on the side nave walls and the smaller icons on the tables are painted after 1960 in byzantine style by the local icon painters, e.g. “The Mother of God, Foretold by the Prophets” on left side nave wall. In the cabinet on the left there is standing the icon of the St. Nicholas the Wonderworker and in front of it stands the candle-table where the worshippers can light candles in prayerful remembrance for their deceased relatives and friends. On the right side of this Cathedral there is located the Episcopal see, the Cathedra. The Cathedral of Kuopio has been the main church of the Diocese of Karelia since 1940.

Divine Service in the Cathedral:
Saturday Vigil at 5 Pm
Sunday Liturgy at 10 Am

THE ORTHODOX PARISH OF KUOPIO